I grew up in Flint. I still have relatives and friends in Flint and the surrounding area. I regularly visit Flint. I toured downtown Flint this summer. I happened to be in the studios of WJRT-TV this past October on the day the Flint water scandal became “breaking news” from reporters all over the city.

Add to this the fact that my (Flint area) brother, Big Rob, and I have been following this story since it's inception. It would be no exaggeration to say that we've read millions of words about Flint water over the past few years. In short, I believe I have the credentials to make some personal observations. (This may take more than one column.)

So, to begin, let me illustrate what it's like to live in Flint right now (on a personal level). Do me a favor. Go get a bottle of water and pour it in your bath tub. Not too overflowing, eh? Well, if you have an average size tub that holds 50 gallons, it would take 533 bottles of water (12 oz. Size) to fill the tub so you can take a bath. By the way, you didn't want that water to be hot, did you?

Now, I am not going to rehash all the news reports you've been reading. I agree with those who say the most important thing right now is to move forward to remedy the situation as soon as possible. After all, we're talking about the lives and well being of children here. Regardless of your political views, the children of Flint had nothing to do with who their parents are or where they live. They should not be punished for just existing.

I do take issue, however, with those who say assigning blame for this adult-made catastrophe is unimportant. As former Mlive columnist Andrew Heller noted: “What's important is figuring out what went wrong and what is needed to remedy the situation. What’s the best way to make sure something bad isn’t repeated? Study it, figure out who did what and why, then take steps to make sure it doesn’t happen again, right? Only the people responsible don’t want blame assigned.” (http://andrewheller.com/161-2/)

Right now, we're seeing all sorts of finger pointing and blame deflection strategies. Indeed, Governor Snyder has two PR firms working overtime to shape the conversation (away from blame). My point would be, though, that if determining blame is a concept that is not important any longer, what are we going to do with our criminal justice system? Catching the burglar, identifying the embezzler, jailing the person responsible for banking fraud, stopping that super drunk driver -- no longer a priority? That said, here's what I think this state administration cannot do.

If you are a governor who campaigned under the claim that you are one tough nerd whose strength is attention to detail, you cannot invoke the “I did not know the details” argument? Either you are in control of your underlings or you are not.

If you are of the party that fought tooth-and-nail against federal bailouts of companies and argued that those companies should just go bankrupt, you cannot now go hat-in-hand to the federal government and ask them to bail you out. Wouldn't this be a “conservative of convenience” philosophy?

If you are the administration that imposed an emergency manager with dictatorial powers onto a community, you cannot now try to argue that the EM was actually implementing the will of the people. After all, the key message you send when appointing an EM is: “If I want your opinion, I'll give it to you.”

In addition to these items, I keep coming back to the “run things like a business” theory, specifically the governor's line during the last election that “you can trust me because I'm an accountant.” An accountant might have taken a few things into consideration.

First, the Flint EM publicly stated that the switching of the water source would reduce the city's deficit by $6-$7 million. If the administration had known the law, they would have known this was false. According to former Wayne County Executive, Robert Ficano: “In reality these so-called savings would have no direct impact on the budget deficit of Flint. The estimated savings, if accurate, are required by law to be passed on to those who pay water bills and cannot be applied to the city’s deficit.” You'd think an accountant would know the law. (http://www.freep.com/story/opinion/contributors/2016/02/04/ficano-flint-water/79662558/)

We also know that the Flint City Council was told that switching to the Flint River as a main water source would require a $61 million upgrade to the city's water plant, which is why they rejected the idea. Not so for the EM. So, saving $7 million would only cost Flint $61 million. Odd accounting, eh? (http://www.freep.com/story/news/local/michigan/flint-water-crisis/2016/02/03/video-flint-council-voted-kwa-but-not-flint-river/79759726/)

And, according to an e-mail from the director of the Detroit Water and Sewerage Department, had Flint chosen to continue getting it's water from the DTWS and not switch to another source: “When compared over the 30 year horizon the DWSD proposal saves $800 million dollars or said differently – saves 20% over the KWA proposal." Again, nice accounting. (http://www.metrotimes.com/Blogs/archives/2016/01/25/new-emails-reveal-the-switch-to-the-flint-river-was-not-about-saving-money)

The bottom line is that the Flint water tragedy makes no sense at any level. There are lessons to be learned, obviously, but we need to know the why as well as the what. In the long run this fiasco is going to impact every taxpayer of Michigan. When the bills come due, we need to know who to thank.

*Note: Below are communications between the DTWS and Flint's EM. They detail the savings Flint would have realized by staying with the DTWS and the rejection of the offer by Flint's EM. 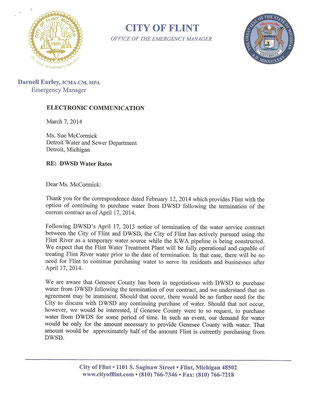