The Fourth of July is this week and with it comes the traditional opening of the picnic season. Enjoying food in the great outdoors is a sublime pursuit indeed. We're unshackled from the indoor stove and free to grill, depending on your budget, everything from gourmet steaks to road kill discoveries.

Other times of the year seem to be governed by the Food Channel syndrome – if one spice is good then 37 spices must be 37 times better and garlic goes in everything. (I like my shortcake made with fresh Michigan strawberries sans garlic, thank you very much.)

I don't know a lot about food, but I do know I look forward to summer fare. I do know, however, that sitting under a tree and opening peanuts in the shell is best done in the summer because you can toss the shells on the ground and since you're outdoors your mate doesn't feel the need to vacuum you afterwards. I also know that there's nothing quite as refreshing in the summer as a big slug of made-in-Detroit Faygo Red Pop. We Michiganders know that “red” is both a color and a flavor.

On this holiday, though, nothing is as American as a hot dog. According to the National Hot Dog and Sausage Council: “Americans consume 20 billion hot dogs a year. That works out to about 70 hot dogs per person each year. Hot dogs are served in 95 percent of homes in the United States.”

This staggering amount leads us to the great hot dog conundrum that has vexed mankind since the beginning of dogdom. Why are there typically 10 hot dogs per pack and eight buns per bag? I always thought the answer was obvious. It's so you can chop up those extra two dogs and put them in other dishes, like adding zip to a can of SpaghettiOs or livening up a fruit salad. I was wrong.

The Council tells us: “When manufacturers began packaging hot dogs, they chose the 10 to the pack formula. Sandwich rolls, or hot dog buns, most often come eight to the pack because the buns are baked in clusters of four in pans designed to hold eight rolls.” The hot dog makers and the bakers have never gotten together to resolve this disparity.

Don't worry, though. There is away around having leftover hot dogs. “You need to purchase five bags of eight-to-the-pack buns and four 10-to-the-pack hot dogs to break even.” (http://www.hot-dog.org/culture/hot-dog-fast-facts)

This fact directs us to an ongoing debate in Michigan because there are two distinct styles of the Michigan Coney – the Detroit Coney and the Flint Coney. There is a big difference and each style has its proponents.

“It has long been debated as to which style of Coney dog is better. The Flint Coneys are all made using Koegel hot dogs and the traditional Flint Coney topping.  The Flint Coney sauce is said to be dryer than its counter part in Detroit.  It is more of a hot dog topping than a sauce as it is more of a loose meat consistency.  Detroit Coneys are more closely related to a Chili dog.  You will likely be given a fork or spoon to help you eat your Detroit Style Coney Dog.  Both are high quality Michigan Hot Dogs.  Made using the highest of meat standards.  Koegel and Kowalski are the most popular hot dogs for both the Flint Style Coney and the Detroit Style Coney respectively.” (http://tracemiester.tripod.com/hotdogs/flint_style_coney.htm and

These two styles have had such an influence on the hot dog world that even dictionaries define the two. For example, the Urban Dictionary says: “A term that refers to the type of Coney dog that is served in Coney Island restaurants and diners in Michigan. A true Flint style Coney is a Koegel's hot dog served on a steamed bun with Coney sauce, onions and mustard only. The key is that Flint style must use the dry, loose meat Coney sauce NOT red sauce or chili sauce and NO beans or sauerkraut. If the dog is served with chili then it’s just a generic Coney dog, Chili dog or in Michigan a Detroit style dog.” (https://www.urbandictionary.com/define.php?term=Flint%20Style)

Now, want to hear something weird? There are two places in America (outside of Michigan) that serve “Michigan Dogs,” but you can't get these in Michigan. One is in upstate New York. Michigan Hot Dogs in New York State: “Steamed red-skinned wieners are put on a steamed bun, and garnished with a tomato sauce, chopped fresh onion and yellow mustard. The tomato sauce is flavoured with spices like cumin, cinnamon or nutmeg.”

The other place is in Quebec, Canada. “In Montreal, the hot dogs are called in French 'Hot Dog Michigan.' Both the wiener and the bun are steamed. The hot dog is dressed with thick spaghetti sauce, and chopped fresh onion. (http://www.cooksinfo.com/michigan-hot-dogs)

So, with all this earth shattering information in hand, enjoy your Fourth of July holiday. I'll be having peanuts in the shell for my hors d'oeuvre, followed by a grilled (made in Flint) Koegel's Vienna on a locally-baked bun, with some Better Made potato chips (made in Detroit for 85 years), washed down with a frosty Faygo Red Pop (from Detroit). You can't get more Michigan than that.

I grew up in Flint, so for me the ultimate Flint Coney Dog is from Angelo's. 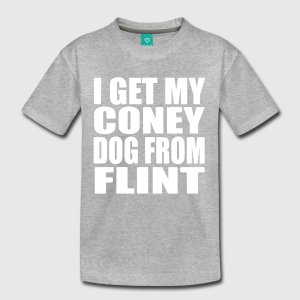 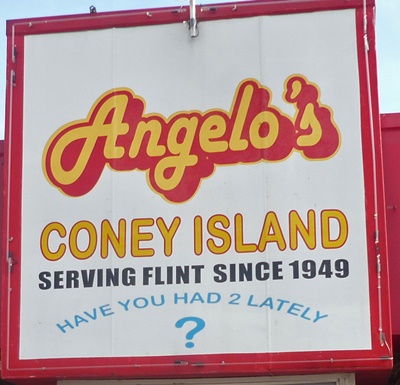 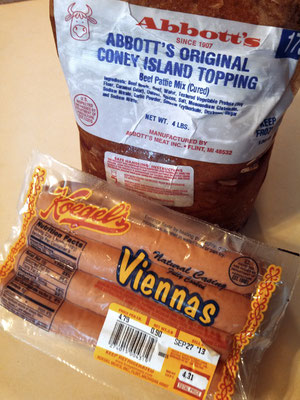