All of us are due for some good news. In many respects, the last two years have been akin to hitting yourself in the noggin with a ball peen hammer. All is not doom and gloom, however, because it turns out that you live in the best place on earth. All you have to do is hang in there.

Why the optimism? In a new book a geopolitics and globalization expert says this: “The Great Lakes region – and specifically Michigan – may become the best place on the planet to live by 2050 because of climate change.”

The book is “Move: The Forces Uprooting Us” by Parag Khanna. The book “...explores a vision of the future with civilization defined by mobility and sustainability.” Khanna foresees catastrophic climate change, disrupted economies, and destabilized governments. “As we scanned the world for geographies that offer abundant freshwater, progressive governance, and could attract talent to innovative industries, we decided on … Michigan.”

This so-called “New North” is making “significant investments in renewable energy, food production, and economic diversification.” The bottom line is that we in Michigan should feel pretty good about where we live. (https://www.mlive.com/public-interest/2021/11/michigan-will-be-the-best-place-to-live-by-2050-because-of-climate-change-new-book-says.html)

The National Retail Federation backs up this assertion: “Americans are buying everything they can get their hands on. Claims that the country is running short on everything misses a key point. America has, in fact, imported an immense amount of stuff in the past eight months. And that's part of the reason we're in the midst of an epic supply-chain congestion.”

Americans are breaking shopping records, too. In the first nine months of 2021, retail sales were up 14.5 percent over the same period in 2020 - a year in which retail sales jumped eight percent over 2019. The NRF expected to end the year with sales up 13.5 percent. All of that means that the inventory to sales ratio isn't low because the US is short on stuff. It's low because sales have gone completely nuts.”

In the words of the cartoon character Pogo may apply here: ““We have met the enemy and he is us.” The links in the chain will eventually untangle. (https://www.yahoo.com/lifestyle/america-isnt-running-everything-just-205900297.html)

While we humans try to figure out the world around us, it should come as no surprise that our pets sense that confusion. Does your dog look at you and tilt its head? There's a reason for that. “For the first time, researchers have produced a  study on the topic, and they're pretty sure the dogs are thinking—hard.”

Apparently, some dogs are more aware than others. “The 'gifted' dogs were far more likely to be head-tilters than the others dogs. We suggest a relationship between head-tilting and processing relevant, meaningful stimuli."

Oh, and here's another nugget: “Each dog tends to tilt its head to the same side every time, and it doesn't matter where the human is standing.” (https://www.newser.com/story/312840/a-head-tilt-by-your-dog-is-a-good-sign.html)

Maybe dogs are thinking hard because we humans could use help in the cogitation process. A case in point is the great burger blunder. This goes back to the 1980s.

The story goes like this. “Back in the 1980s when the McDonald’s Quarter Pounder was the burger to beat, A&W had the great idea to debut a one-third pound burger at the same price as a Quarter Pounder. More meat for your dollar—what could go wrong? Unfortunately, the burger was a total flop. Customers indicated that they thought one-third pound of meat was smaller than one-fourth pound, because four is a bigger number than three. People considered the burger a rip-off, not a deal.” (https://thetakeout.com/new-aw-burger-bigger-than-quarter-pounder-math-fail-1847927720)

Now A&W is giving Americans a chance to prove they can grasp simple fractions. It has decided to rebrand the One-Third Pound Burger in a way that Americans of all math skill levels will be drawn to: the Three-Ninths Pound Burger.

A very funny commercial starring Rooty the Great Root Bear explains all of this. See the video at: https://youtu.be/EMNqJQaf08E.

Finally, a simple question with a simple answer. Who likes a scrumptious cookie? The obvious answer is – everyone! Wow, do I have good news for all of us. The Girl Scouts have announced a brand new cookie for 2022 and I predict it will be a tremendous taste treat.

“The Girl Scouts of the USA announced that the new Adventurefuls cookie will join its nationwide lineup for the 2022 Girl Scout Cookie season. An indulgent brownie-inspired cookie with caramel-flavored crème and a hint of sea salt, Adventurefuls take cookie lovers on a delicious taste adventure. Every bite is a combination of chocolatey and caramel flavors, and smooth and crispy textures.” (https://www.gssjc.org/en/about/our-council/news/2021/new_adventurefuls_gi.html)

The national roll-out for Adventurefuls is in January, but local timing varies. It's very cool that Scouts in Saginaw, Michigan have been designated as the first to offer these cookies. The rest of us can go to www.girlscoutcookies.org to sign up to be notified as soon as Adventurefuls and other Girl Scout Cookies go on sale where we live.

Now, if you can see several boxes of Adventurefuls in your future, just remember  the words of former Congresswoman Barbara Jordan. “ "Think what a better world it would be if we all, the whole world, had cookies and milk about three o'clock every afternoon and then lay down on our blankets for a nap." 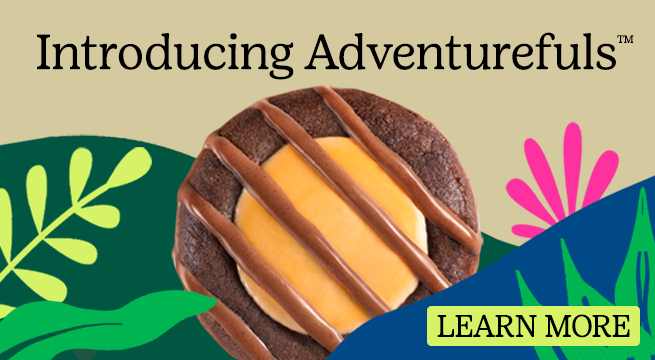 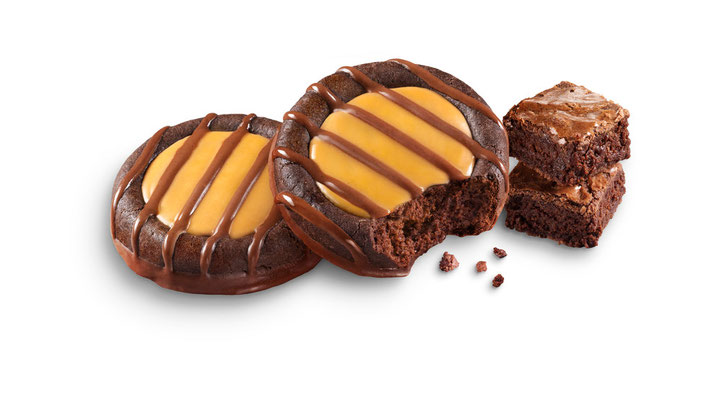