With all that's going on in the world, we sometimes lose focus on what's cool about our own state. There are a lot of interesting Michigan stories all around us. What we have to do is stop and take a look.

One thing that's cool is a drink called the “Boston Cooler,” a concoction that (despite its name) is uniquely Michigan. The main component is Vernors Ginger Ale. “America’s oldest surviving ginger ale was the creation of Michigan’s first licensed pharmacist. Dr. James Vernor of Detroit. Vernors was reportedly first sold as Vernor’s Ginger Ale between 1866 and 1880.”

Various versions of the Boston Cooler did exist back then, but mainly as a cocktail drink. “It was the Detroit version that really caught on nationwide. According to legend, Fred Sanders (of Sander’s Michigan hot fudge fame) invented the modern iteration of the Boston Cooler.”

There is a basic recipe. “The Boston Cooler likely looked very similar to how it’s created today — three parts vanilla ice cream with one part Vernors, either blended or poured. Die-hard fans of the Boston Cooler claim the ice cream must come from Stroh’s, another Detroit brand.” Authentic Boston Coolers are sometimes hard to find, but if you're in the Flint area the Halo Burger restaurants still feature the drink. (https://gandernewsroom.com/2022/06/15/history-of-vernors/)

Speaking of Flint, a study by U.S. News and World Report came up with a somewhat surprising conclusion. The publication ranked the Flint area among the best places to live and retire to in the U.S. “Flint and Genesee County ranked as 131st best place to live and 111th best place to retire in the country. The area also ranked sixth best in Michigan.”

A big plus for Flint was low prices for houses. “Flint's cost of living and median home sale price remain well below the national averages. The average house sold in the Flint area was $142,700 while the national average is over $315,000.” See the full report at: https://realestate.usnews.com/places/michigan/flint.

Those houses in Flint are probably pretty modest in size, so you might wonder what is the largest house in Michigan. The Angi website identified “The Largest Residential Home in Every U.S. State.”(https://www.angi.com/articles/the-biggest-house-in-each-state.htm)

For comparison, Fair Field in New York is the largest home in the country. “At 110,000 square feet it is twice the size of the White House.”

Another cool thing about Michigan are places that have stood the test of time. “According to TripAdvisor, Doud's Market on Mackinac Island holds the title of being the oldest grocery store in America. Doud's Market was established in 1884, stocking its shelves and providing quality customer service now for over 130 years.” (https://www.tastingtable.com/898063/this-is-the-oldest-family-owned-grocery-store-in-the-u-s/)

Doud's is about the same age as the state park on the island. However, the park did not begin as a state park. “If you go back 125 years, Michigan had one national park. Mackinac Island State Park was established as Michigan’s first state park – the first state park in the entire country, in fact. But for two decades before that, the majority of Mackinac Island was known as Mackinac National Park. It was the second national park in the United States, created just three years after Yellowstone National Park.” (https://www.mackinacisland.org/blog/national-parks-in-michigan-mackinac-island-was-the-first/)

As an aside, did you know the Island is open for cross country skiing in the winter? There are miles of groomed trails on which you can access things summer visitors can only see from afar. Many years ago, I wrote an article for Snow Country magazine titled “Island in Winter.” You can read the article at: https://books.google.com/books?id=Clsk9FAsYVIC&lpg=PP1&pg=PA60#v=onepage&q&f=false.

I do recall that getting to the Island during February was tricky. I took a flight on Great Lakes Air in St. Ignace. The actual time in the air was three minutes and eight seconds. The pilot told me it was the shortest regularly scheduled flight in America.

The new park joins an elite group. “Keweenaw Dark Sky Park is now among one hundred ninety-five spots around the world that have been named to the International Dark Sky Places Program, which was founded in 2001 to encourage the protection and preservation of dark sites through lighting policies, public education and other measures.”

Finally, closer to home, something that is not really Michigan cool but is certainly Michigan unique. To wit, some advice. When you venture to the banks of the Manistee River don't slip on the rock snot. “Snotty-looking globs of invasive algae mats found in the Manistee River have alarmed freshwater scientists and state environmental authorities who are now trying to figure out to what degree 'rock snot' algae is an ecological threat to Michigan rivers.”

Rock snot has been described as resembling clumps of mucous. “Scientists and anglers are worried the slimy stuff may begin to colonize in more cold-water streams across northern Lower Michigan.” (https://www.mlive.com/public-interest/2022/06/after-manistee-river-infestation-scientists-try-to-unravel-the-mystery-of-rock-snot.html)

Hmmmm. If you think about it, sitting on the Manistee watching the rock snot bloom while sipping a Boston Cooler would be a Michigan experience no other state could duplicate. This could be a tourism bonanza waiting to happen.

(Click on a page to see a larger size.) 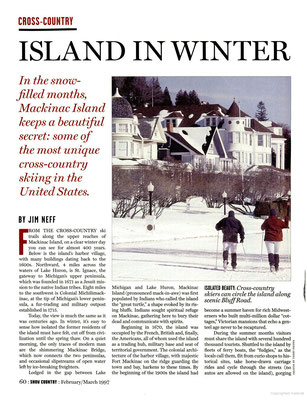 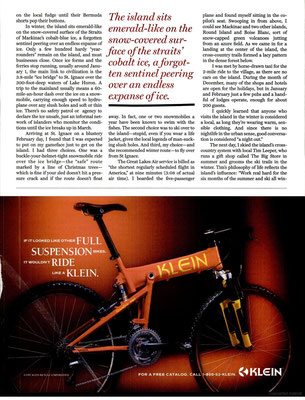 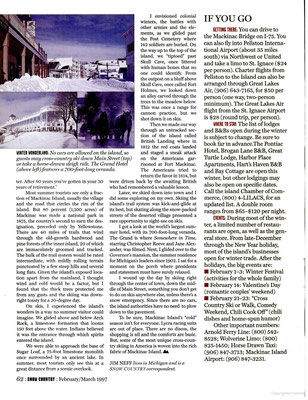