One of the nuns at Flint St. Michael High School told us that it was impossible for the human mind to remember more than seven things at any one time. I don't know if this is true, but if you can't believe a nun who can you believe? Beyond that, just ask any wife who has sent a husband to a store without giving him a written list on paper and she will probably tell you that “seven” is on the high side.

There are certainly more than seven thought provoking things vying for our attention these days. For starters, here are seven random items to get the ball rolling.

Iran has been in the news recently, but most of us have no idea where that country is located. “A Morning Consult/Politico survey finds fewer than three in ten registered voters can identify Iran on an unlabeled map. Men were about twice as likely as women to be able to identify Iran. Wealthier and more educated voters were also more likely to get it right.”

Political party affiliation made no difference. Only 27 percent of Democrats could locate Iran on a map, 28 percent of Republicans and 31 percent of Independents. “Some respondents believed that Iran was located in: The U.S., Canada, Spain, Russia, Brazil, Australia, and in the middle of the Atlantic Ocean.” See a breakdown and a map at: https://morningconsult.com/2020/01/08/can-you-locate-iran-few-voters-can/ 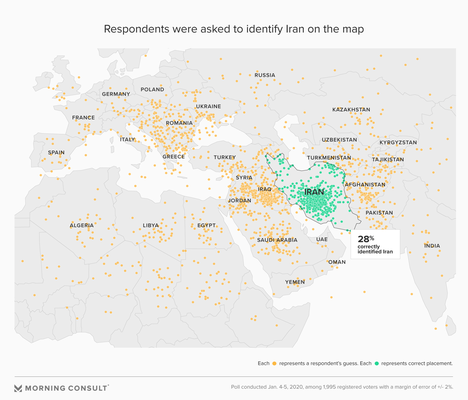 Closer to home, the economy is always in the minds of many Americans. Recent numbers are something to consider. “The Institute of Supply Management's index of manufacturing activity hit its lowest level since the end of the Great Recession in December. It shows worsening conditions for the U.S. manufacturing sector, which has been in contraction for five straight months. The index came in at 47.2 in December. Any reading below 50 suggests the manufacturing sector is in contraction.” (https://www.axios.com/us-manufacturing-index-ism-lowest-great-recession-af6fb388-9cee-4944-8955-6aec166671ea.html)

Those numbers don't mean that American companies are doing poorly. It helps that so many pay little or no taxes. “Profitable American corporations (379 of them) in 2018 collectively paid an average effective federal income tax rate of 11.3 percent on their 2018 income, barely more than half the 21 percent statutory tax rate. In 2018, 91 corporations did not pay federal income taxes on their 2018 U.S. income. Another 56 companies paid effective tax rates between zero percent and five percent on their 2018 income.” (https://itep.org/corporate-tax-avoidance-in-the-first-year-of-the-trump-tax-law/)

With income and taxes in mind, Census data just released shows Michigan has 62 cities and townships with a median household income of at least $90,000. The only Northern Michigan locale on the list is Peninsula Township (Grand Traverse County) with a median income of $100,949. It came in at number 35.

On a worldwide scale, who gets “shown the money” is interesting. Men do pretty well. Women not so much. “None of us will see gender parity in our lifetimes, and nor likely will many of our children. That’s the sobering finding of the Global Gender Gap Report 2020, which reveals that gender parity will not be attained for 99.5 years.”

This is an ongoing study. “Now in its 14th year, the Global Gender Gap Report 2020 benchmarks 153 countries on their progress towards gender parity in four dimensions: Economic Participation and Opportunity, Educational Attainment, Health and Survival and Political Empowerment. Globally, gender parity stands at 68.6 percent.”

The study also revealed some telling statistics. “In the past 50 years, 85 states have had no female head of state. In terms of economic participation, the gender gap will take 257 years to close. There are 72 countries where women are barred from opening bank accounts or obtaining credit. There is no country where men spend the same amount of time on unpaid work as women.” (https://www.weforum.org/reports/gender-gap-2020-report-100-years-pay-equality)

In terms of the gender gap, something is happening in the U.S. that may influence equality progress. “Buried deep in the U.S. government’s December jobs report was an interesting piece of data—women hold more jobs than men, occupying 50.04 percent of positions. According to the U.S. Bureau of Labor Statistics, there are now 109,000 more women working than men. It's believed by experts that this trend will continue and gain more momentum as the number of working women increases, while the amount of men in the workforce declines.”

Another trend that may affect the statistics deal with traditional male employment. “Jobs in the mining and manufacturing sectors—viewed primarily as male-oriented industries—lost 21,000 jobs.” Meanwhile, women hold 56 percent of positions in financial-related roles. (https://www.forbes.com/sites/jackkelly/2020/01/13/women-now-hold-more-jobs-than-men)

All of this is pretty serious stuff, but odd things can creep into our minds. For instance, with two lakes in Cadillac fishing is a major activity. Have you ever caught a fish worth $3.1 million?

“Self-proclaimed Japanese "Tuna King" and sushi restaurant owner Kiyoshi Kimura paid a record $3.1 million for a giant bluefin tuna at the New Year's auction at Tokyo's Toyosu fish market. The valuable and vulnerable fish tipped the scales at 612 pounds.” For those keeping score at home, that's around $6,354 per pound. (https://www.cnn.com/2019/01/05/asia/giant-tuna-sets-record-at-japan-auction/index.html)

Finally, since we began the seven things theory with a nun reference, it seems only fitting to end on a religious note. A Pew Research Center study analyzed 50,000 sermons at Christian churches and determined the median length for a sermon is 37 minutes. A 37-minute sermon is roughly 5,502 words. (https://www.pewforum.org/2019/12/16/the-digital-pulpit-a-nationwide-analysis-of-online-sermons/)